Getting to a Fresh Start in the Dining Room 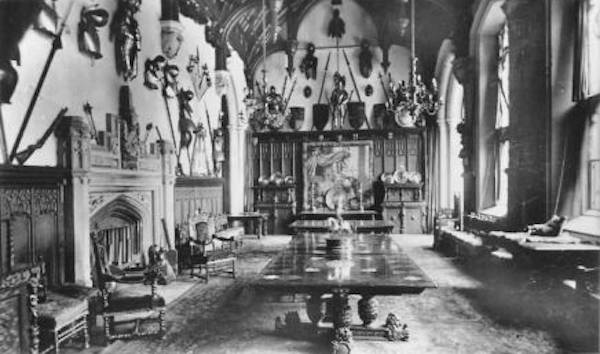 A lot has been written about the demise of the traditional dining room, and how the space in new construction should be allotted to something else entirely. I know plenty of people who've turned their existing dining rooms into something else-- the family reading room, the home office, the craft room, the school work headquarters. I've even seen a house where the homeowners decided the dining room was way too tiny to be useable as one, and turned it into the dream walk-in pantry they always wanted.

That's all cool. I've seen some awesome alternative-to-dining-room spaces. But I've come to the conclusion I'm an old-fashioned girl. I want my dining room. As a dining room. That's even with a reasonably roomy eat-in kitchen. 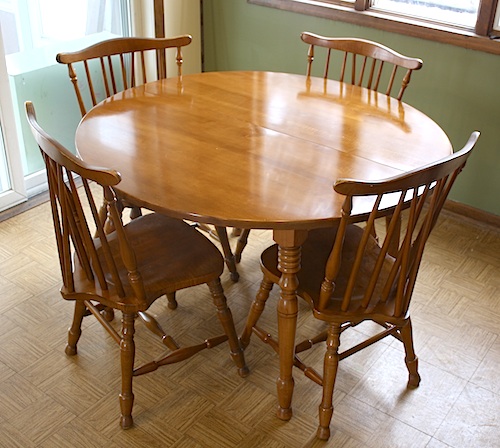 Part of it is the size of our family. There's five here when Grant, my oldest attending college locally, is home for dinner, which is often. He almost always brings his girlfriend. That's six. Add extended family--my mother, my dad, my sister and her family, my boyfriend's four college-student-aged kids, cousins and friends-- extra dining space is not only needed, it's regularly needed.

That said, I still think dining rooms, even if they are meant to be used as dining rooms, need to be able accommodate the daily life of families. Social studies projects. Sewing machines. Tomato plants on the window sill. I'm not really about rigid definitions of space in a home, even if I want a room that functions primarily as a dining room.

From the front door, my 1939 colonial-style house flows from living room to dining room to kitchen at the rear of the house, so the dining room is a pass-through room. High profile. And it's got the goods to be a handsome space. These corner cupboards are the reason I bought the house. 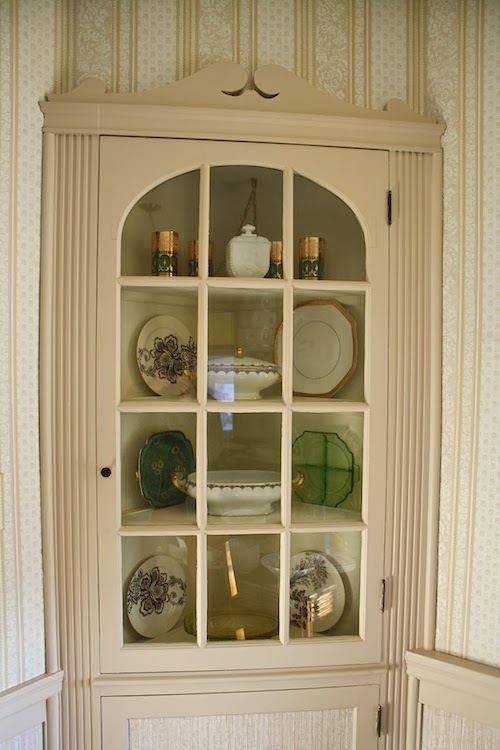 I was less thrilled with the fleshy-pink beiges, 80s vinyl wallpaper, cracked ceiling and walls, and sloppy paint job of previous owners.

Since I moved into the house, I've suffered a lot of conflict over this room. It was only cosmetically ugly, rather than needing serious attention--plumbing, remodeling, electrical. So it wasn't a top priority in that sense. But I'd walk through it every day, and it depressed/irritated/shamed me that it was such an eyesore right where we lived, every day. 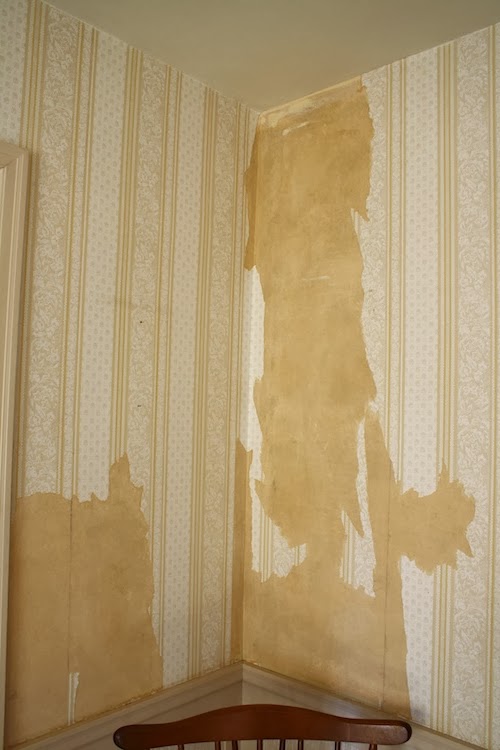 This year there's been some progress. What follows is a series of bad cell phone photos, but it gives you an idea where we've been in the last six or seven weeks. 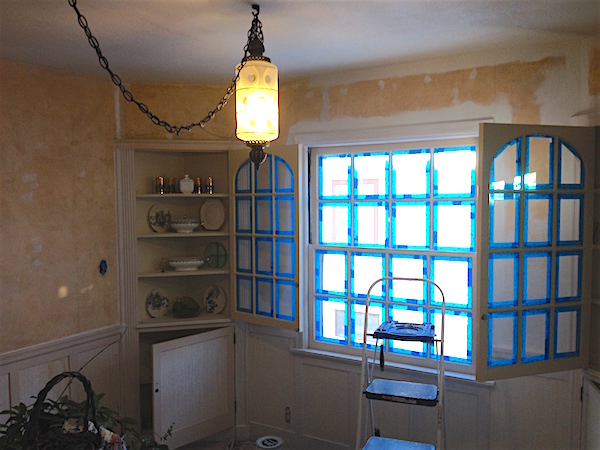 The wallpaper was stripped down to the plaster. 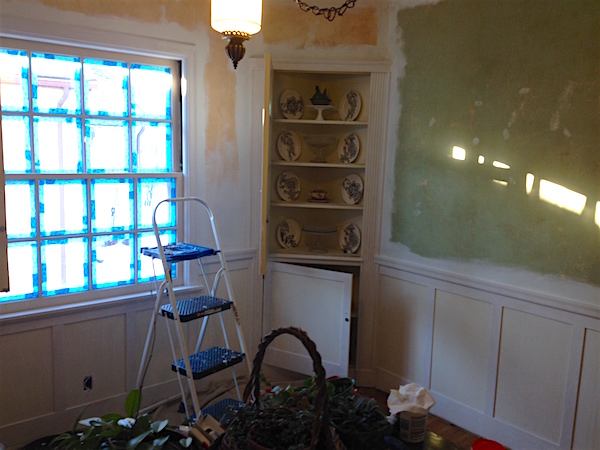 The cracks were repaired and the room re-textured and primed: 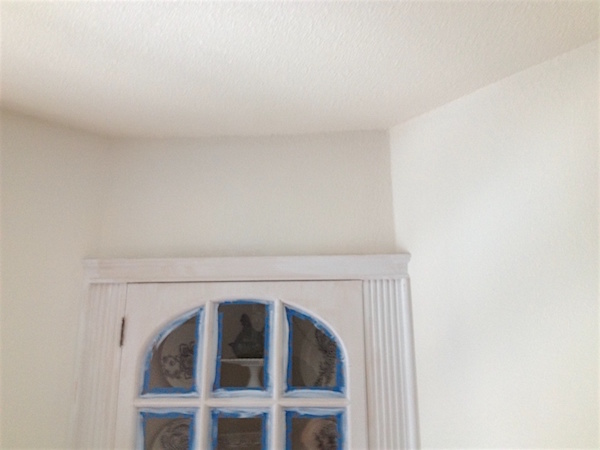 The pediment trim at the top of the corner built-ins were taken off to make wall repair/painting easier to do. They'll come back when it's done. 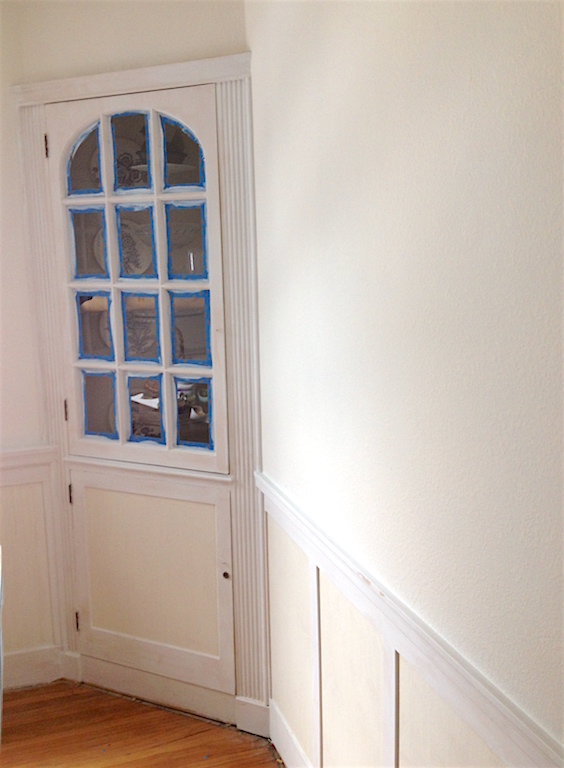 We also removed a deep cornice wall that hung across the top of the dining room alcove to hide a downlight fixture. I didn't take a before photo and wish I had. But I don't think a photo would have captured how removing that made the room seem bigger and the ceiling higher and airier. 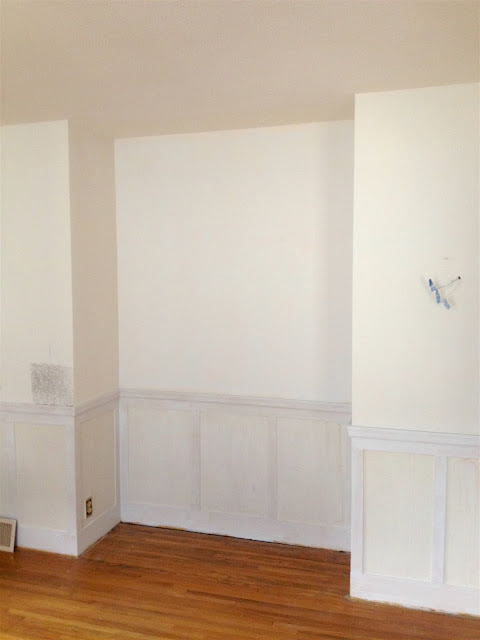 To the right is wiring for the doorbell, a vintage one I'm hoping to get operating again.

I'll be coming back to this in the coming weeks with some further progress. Paint will change the look of this dramatically, and I'm excited to have a room that lives up to its potential.
Posted by Laura at 1:55 PM