This Dip: It's Kind of a Big Dill 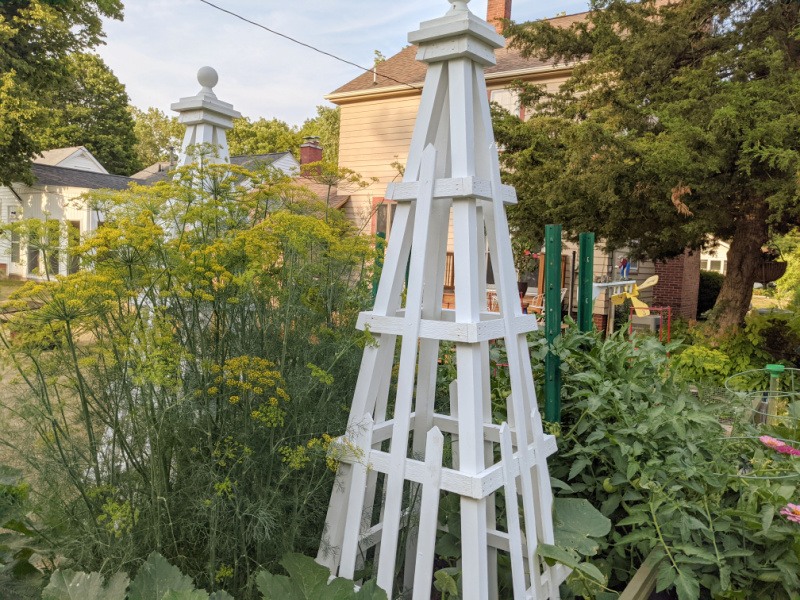 I've got a lot of dill in the garden this year. Like, a LOT. Mind you, it is totally my fault that we have this predicament. When I first started vegetable and herb gardening many seasons ago, I started some dill from seed inside, and transplanted the little herblets out when the weather got warm. Now, every season, the dill grows tall everywhere, with lots of full feathery fronds and giant seed heads. I let it come and go as it pleases, for the most part.

This year it's been a little, dare I say, out of control. Even for a person who likes dill. It's shown up in places I don't really care for it to be, like driveway cracks and perennial beds, and I've even had to pull up some of the plants so that they don't shade out other things, like my peppers, which need their fair share of the sun too. 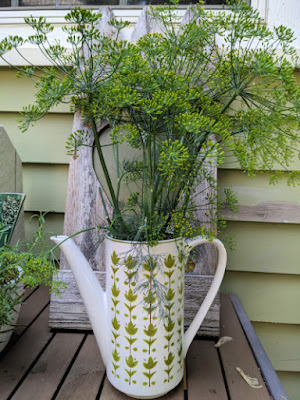 It's hard to hate the situation, though, because I love the smell so much. Along with cucumbers and greenbeans, it's the smell of high summer in the vegetable patch. I like adding it to flower bouquets, and sometimes I like big bunches of it as a stand alone; it makes the kitchen smell great, even if I'm not making pickles. I'm a refrigerator pickle person. My canned pickles are straight up terrible, and I don't seem to have a knack for heat canning them.

It's a shame, because if there were a year I could be hitting the dill hard for pickles, it would be this one. I've got plenty of material to work with. And I have stuffed plenty of dill into the few jars of refrigerator pickles I've made so far. But there are only so many refrigerator pickles I can make, and then I'm looking at my dill-weedy garden and wondering why I was so confident, years ago, that setting this plant loose in my garden was such a good idea.

Another thing I've been trying to do is reduce the number of additives and preservatives in my food. I've discovered that I am sensitive to a few of them, some of them make my eczema worse, and not all of them are great from a healthy diet perspective either. And since one of the worst offenders in this area is salad dressings and dips, I've been experimenting for awhile with homemade ones. I've made a few really tasty and relatively healthy dips (I say relatively, because we're talking mayonnaise here, and there's only so much I can lie to myself), and because of that ongoing kitchen exploration, it seemed like a natural place to use all these bunches of dill. 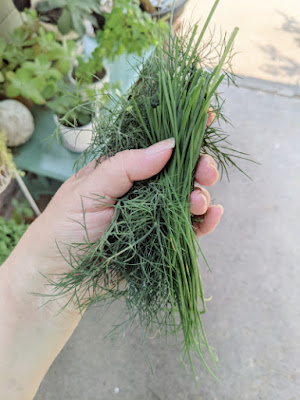 And I do mean bunches. I'm not a measurer of things, which gets me into trouble. If I make a terrific and tasty version of something, and didn't measure any of the ingredients while putting it together, I can't replicate it. If someone likes it and asks for a recipe, I have to say I don't have one, which makes me sound like I don't want to share. But I do want to share, and after several rounds in the kitchen with a notepad and paper to jot down what I'm doing, I have a recipe that is worth sharing.
The only not-a-measurement measurement I will make for this recipe is for the dill itself. You need a big handful of fresh dill, like you see at left. How much is that? No idea. About a 1/3 cup to 1/2 cup chopped, loosely packed? Probably. You can wing this a little. I trust you.

So, a big handful of mostly dill, but also stuff some chives in there too, also as shown. I'd say this amounts to about 1/4 to 1/3 cup chopped and loosely packed. I know "big handful" is relative: I have rather small hands, and so my big handful will be different than your big handful. But it won't matter, because this is a dip recipe, and it is flexible enough to cope with this inconsistency.

1 cup plain greek yogurt. I am picky about greek yogurt. I use Fage brand 2% fat, and I really recommend it for it's thick texture and mild but tangy taste). For a full fat version, you can use sour cream.

1/2 cup mayonnaise. I'm also picky about mayonnaise and want to eliminate some of the fat calories, so I usually make mine with Hellman's Low Fat Mayo or Hellman's Olive Oil Mayo. You can also use full fat mayo if you like. I will still recommend Hellman's/Best Foods, or Duke's.

Juice of 1/2 lemon. Or if you don't have a lemon around (it happens), use a tablespoon or two of apple cider vinegar.

a pinch of sugar 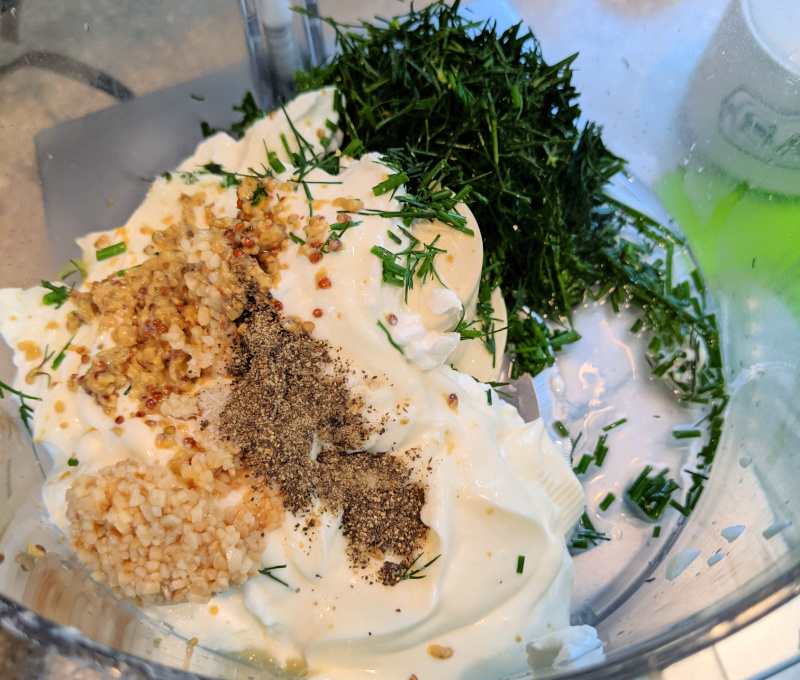 You need to pulse this only a few seconds in the food processor until it is thoroughly blended. Seriously, you will spend more time rummaging around in your condiment rack and scooping stuff out of tubs and jars than you will processing this up. Most of the time I make this, it is a thick pour out of the processor, and it sets up a bit once it's had a chance to meld flavors in the fridge for a few hours. Other times it's very thick and a tablespoon of milk will help get it to the right consistency if you'd rather use this as salad dressing, which you can totally do.  It makes just shy of 1 3/4 cups of dip, and you can double the recipe if you've got a crowd coming, or if your people are just total dip hogs (we know who we are). 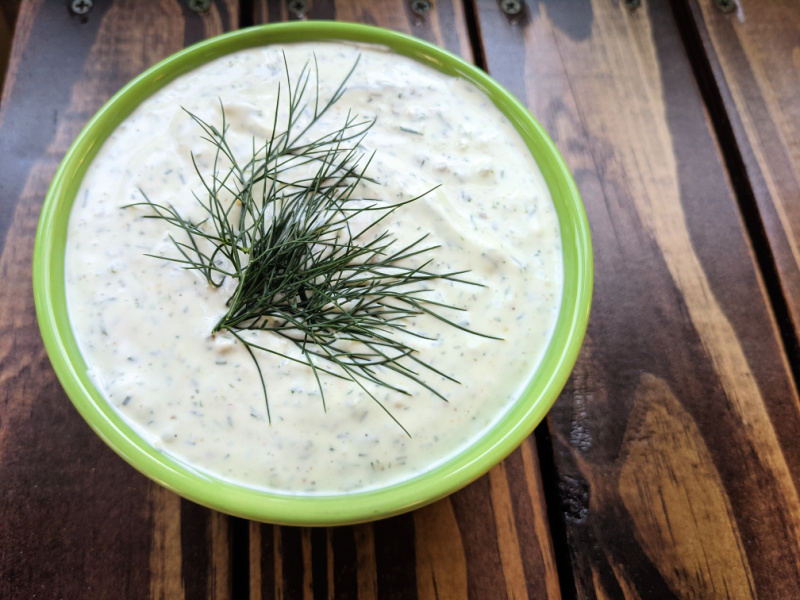 This dip is great with raw veggies and crackers or chips as a dip. It is fantastic on the side of fried green tomatoes. Toss a few tablespoons of capers in it and serve it with grilled salmon. Throw in some grated, drained cucumber and a drizzle of olive oil and it becomes tzatziki sauce for Mediterranean food. Put it on a buttered baked potato. It's great on salad greens and tomatoes. I'm also thinking (though I haven't tried it yet) that it would be good as the dressing for pea salad, or maybe egg salad too. As long as my dill patch holds out, we will have plenty of chances to experiment.