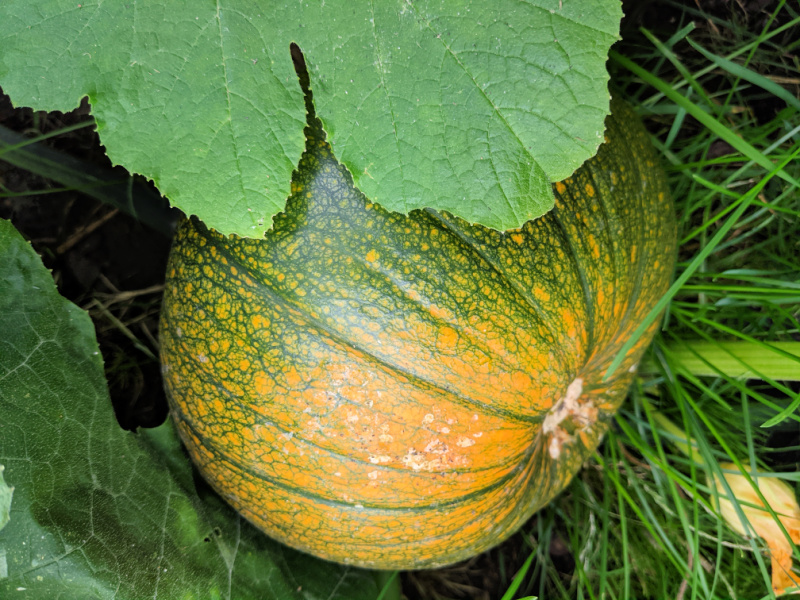 Life can be improbable at times.

Our family has had a lot going this fall, from a couple of medical scares (we are fine, thankfully) to a prolonged bout with COVID, pneumonia, and some other viral crud (also, we are fine, but geez). Piled on top of the last year and a half, after the last five years, where we've collectively seen so many things that we never thought we'd see-- politically, culturally, environmentally-- you name it, October and November have seemed like a lot for me. Unfair, even. Nothing seemed especially easy.

I'd originally started this post some time ago, when I took these pumpking photos that appear in it, but I had to walk away from it, and I'm in such a completely different place from when I snapped these images, I had to backspace-delete entire paragraphs, until the page was blank again. Except for the pictures. I'm keeping those. I persist in feeling there's a metaphor for the pumpkins (like I found for the zucchini in my previous post) that I'm not quite seeing yet and maybe I'll find it if I keep writing. Then again, maybe not, but it's a damn fine story, so I'm determined to tell it, even if I can't hook it into a broader meaning. Maybe that itself is the point. Maybe it's just the story. 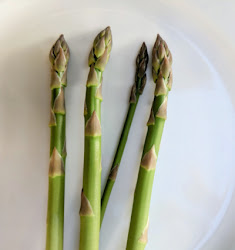 We have an asparagus patch that I would describe as beginner's grade. Asparagus is one of the rare vegetables that are perennial in our northern midwestern geography, and because it needs a permanent place and lots more sun that our backyard provides, we plunked our first crowns in the dirt in our front yard foundation beds. Then for two years, rabbits sawed what little plant growth we achieved completely down to the ground. It led to a lot of cursing before we finally admitted defeat and threw up a wire fence. This year we got a few handfuls of asparagus. It was divine and worth persevering through the bunnies to have. Then, as asparagus does, they grew out their tall feathery tops, and spring moved on to summer, and we also moved on, to carrots and cauliflower and other veg.

While I was busy ignoring the asparagus patch, we realized that a long delayed project, replacing the aging main water line from the house to the municipal water supply, was now imperative. While we were at it, a chipped and cracked and uneven front sidewalk might as well be replaced. The first thing necessitated trenching up a big chunk of our front yard, and the second thing required uprooting the hardscaping around our our front perennial border. The new water main was done in May, and we waited until the very last minute before cold weather for the new sidewalk. While I'm glad they're both finally done, my front yard has never been such a mess. It was hard to regain my enthusiasm for imposing order while waiting to finish up the infrastructure projects. I mentally and literally walked away.

Somewhere during the midsummer months of trying to ignore the unholy mess our front yard had become, I discovered a volunteer vine growing in our asparagus patch. I was able to identify it as a member of the curcubita genus-- the plants that give us summer squash, pumpkins, and gourds-- but since I didn't plant it, it was impossible to know what exactly. Probably spread by birds or animals. I usually weed these things out. This time, I shrugged. I don't even know why. Maybe because I'd already written off the front yard for the year. Maybe because I didn't want to climb into asparagus fence to reach it. Maybe because I wanted to to see what it might be.

The vine grew, and grew, and grew, and started sprawling out into the yard, weaving itself into the uncut grass we were trying to nurture over the trenching scars in the lawn. While it looked robustly healthy, it didn't seem inclined to bloom, and what few buds I found on it seemed to shrivel before opening. Sometimes the offspring of hybrid vegetables are sterile, I reasoned, and this must be the case here. I still shrugged at pulling it out, though. I wasn't exactly embracing the chaos that was our front yard this summer, but I wasn't fighting back, either. I was exceedingly neutral about that vine.

Then Tom came in from yard work one day and said "Did you know we have pumpkins?"

The vine that hadn't managed a single blossom all summer (I thought), now had pumpkins growing. And not just small ones. 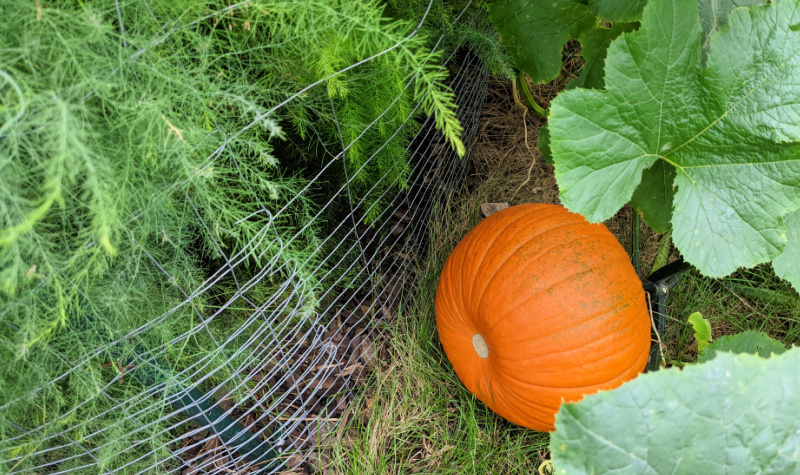 Accidental pumpkins. It's the horticultural equivalent of not knowing you're pregnant.
Perhaps I'd been in training for this all summer, with the zucchini I kept missing until they were gigantic. It's been that kind of year. The thing I love most, my garden, had to run on a certain amount of benign neglect.
I'm always surprised when neglect (benign or otherwise) gives you good surprises, like these fat orange (and green) 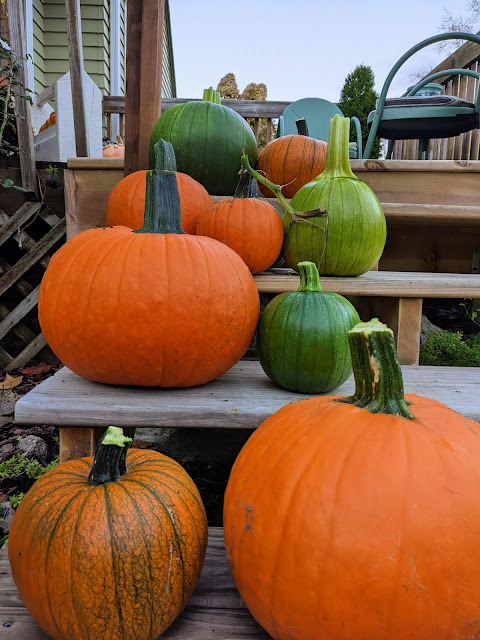 pumpkins. It always feels like luck. Or perhaps serendipity is the better word. Either way, these were the best accident I've had in a long time.
I am a person who leans hard into fall festivities, and only reluctantly gives them up for Christmas decorations. Accidental pumpkins are just perfect for this, and here, on Thanksgiving Day, they're still hanginout out on the front porch. They'll probably continue to hang out there until next weekend, because I don't usually start getting my Christmas on until early December, or even later.
Maybe I'll bring the fully ripe ones in and decide if I can stew them. Maybe I won't and they'll just hit the compost heap.
Today, we're having Thanksgiving dinner for only the nuclear family, since one family member is just now emerged from COVID isolation and the rest of us are starting to feel better from all our various sneezes, coughs, and ailments. It's a pretty simple meal with just the classic Thanksgiving basics-- turkey, mashed potatoes and gravy, dressing, a vegetable, and pie. It seems like a real effort, given that we're still a bit tired from being sick. It's nice, though, to sit down at the sturdy table that serves up our meals every day, and eat something that isn't dry toast and tea. It's nice that we are trending back toward healthy. It's nice we have nowhere to go for a long five-day weekend. It's nice that even in the midst of all our recent chaos, the universe still saw fit to send us pumpkins, when we didn't even ask for them.
Happy Thanksgiving, everyone.
Posted by Laura at 4:04 PM