Do I Have To? Caulk the Tub, or The Ugliest Blog Post Ever

It goes downhill from there. I didn't even finish it, because apparently working in my bathroom until late with the intent of writing a blog post does NOT mean that I'll be taking a photo of the finished project.

But seriously, why do you need to see a tub with fresh caulk? If that's how you get your jollies, you need a new hobby.

Anyway. My tub is the original tub from when the house was built, in 1939. In that sense I love this tub. It's got this cool Art Deco design on the outside, and one day I'm gonna have it shipped out and reglazed. That's the plan. 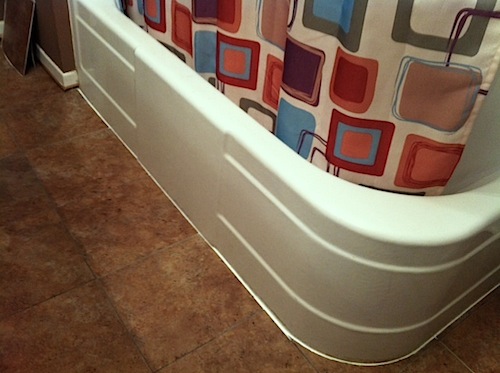 But right now, it's toast. It also has a fiberglass tub surround installed by the previous owners. Also not so cool.

In the past couple of months, ooky black spots of mildew have been appearing in the caulk line between the fiberglass surround and the tub, so I knew it was about time to get the tub recaulked. 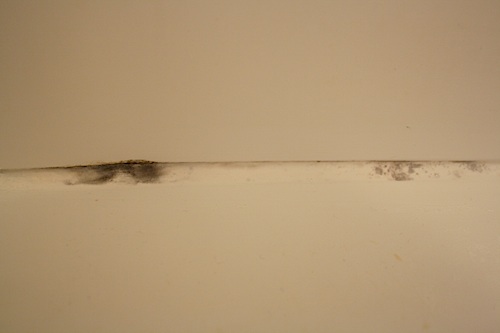 I removed the old stuff with a box cutter and a putty knife. I'm not sure that's particularly advisable for any type of tub in newer condition, but my tub, like I said, is pretty well shot. The glaze is long gone, and there's not really anything I could do to make it worse. The best tutorial I found online is one by Popular Mechanics, here. So do as I say, not as I do. 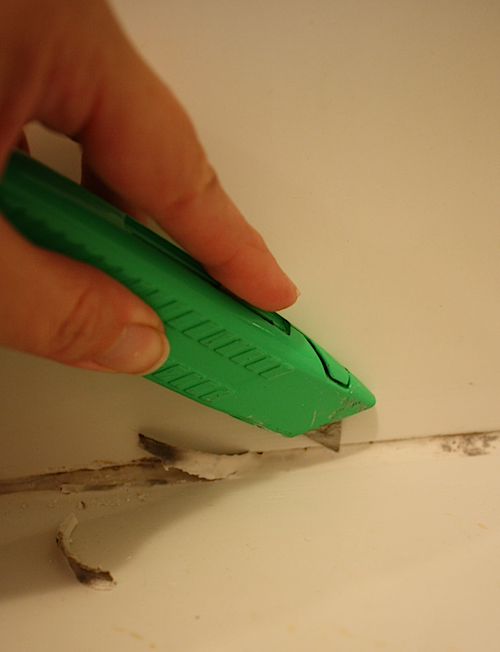 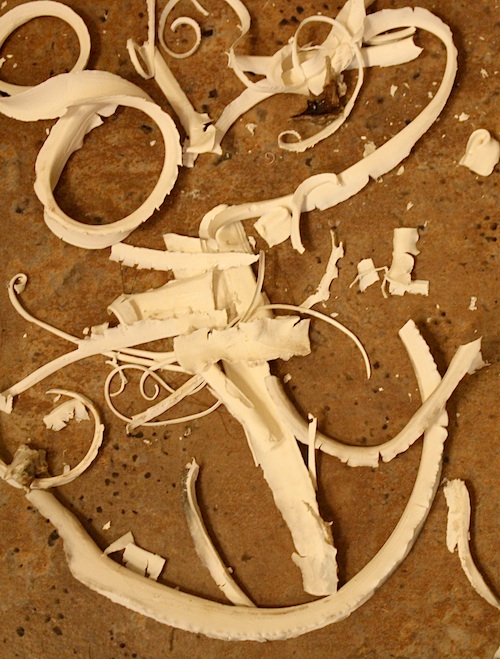 After it was all pulled out, I scrubbed the space with a strong hot bleach and dishwashing liquid mixture and let it dry completely. When I was ready to caulk, I even gave it blast with my hair dryer to make sure it was completely dry in there.

Maybe some of you have seen this pin, from This Old House, making the rounds on Pinterest, about using painter's tape to do a neat line on the caulk. I figured it was worth a try, since caulking is about the messiest thing since eating corn on the cob, and whole lot less fun.

So I figured I'd give it try: 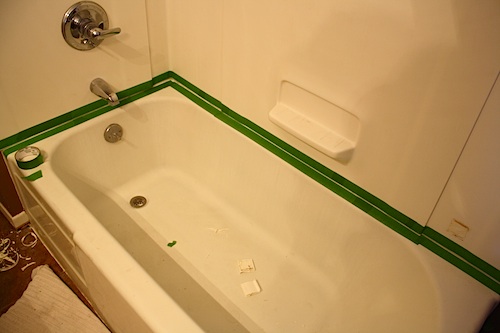 Those white squares in the tub are plastic cleats which were stuck on the fiberglass surround, I suppose to corral the shower curtain. But they were always catching grody grime behind them, and so I popped them off while I was in there with a putty knife. You can see the grimy spot where it used to be on the far lower right of the photo above. More yuck. 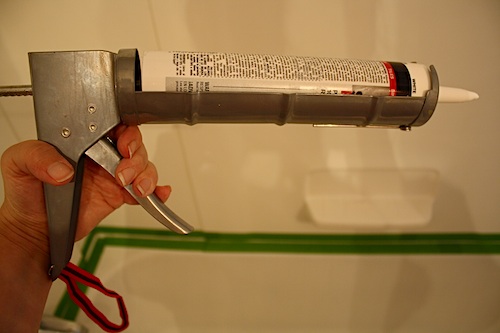 So far in this post I've managed to refrain from caulk jokes in poor taste, but if you can't, I really don't mind. I mean, it's a picture of a caulk gun. What else can you do?

My hands are small and the caulk gun handle hard to compress, so I was shaky. For pete's sake, it looked like I was taking a class in basic buttercream. I mean, look at this:

My inner voice kept yelling: stop acting like a dumb girl. This is a tub, not a cupcake.

That, as far as I was concerned, was the whole problem. 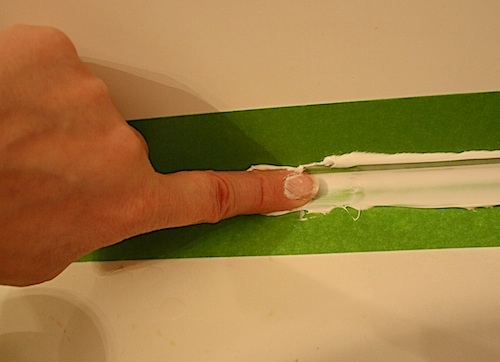 You're supposed to smooth your caulk bead with a wet finger, and really, I just keep both hands, my whole hands, dunked in water during the process. It helps. Wipe everything up with paper towels that you place in disposable plastic bags right away. Caulk, like the common cold, gets every where if you're not careful.

Did the tape work? Yes and no. Yes, it contained the worst of the excess goo on an easily peel-off-able surface.

But it left little ridges, albeit small, that needed to be smoothed with an additional wet finger swipe. At that point it's hard to say whether it saved me excess mess or just moved it around. I think my official review of this idea is "Meh."

Here's the point in the post where I'd show you that picture of a finished project, if I had a brain in my head past 11 p.m. But I don't. You know what it looks like. Use your imagination. Seriously. There's no way that photo was going to rescue this post from its ugly state anyway.

In other "Do I Have To?" news, my oldest son had some unholy fit of ambition and irritation hit him about our garage, and about two hours later I found this on my curb. 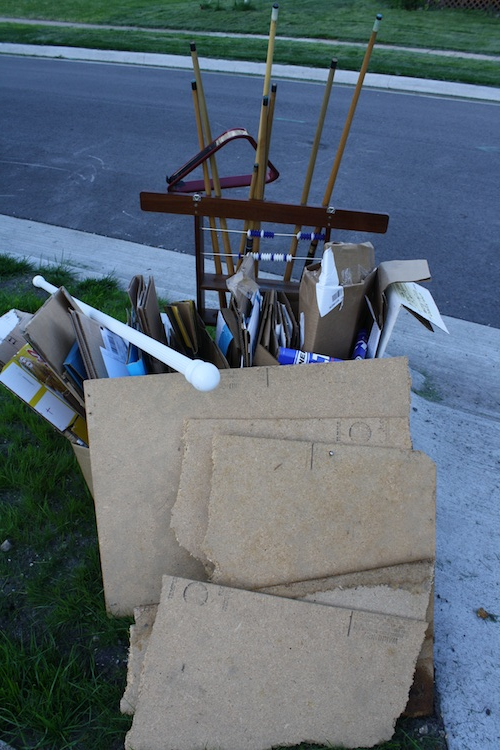 Not only that, he took months worth of soda/beer/wine empties back to the store for deposit. He decided to do both of these things on his own. Either he has a virus, or someone hit him in the head with one of those pool cues. Either way, I'm not complaining. I even let him have the deposit money.

Stay tuned for July's "Do I Have To" post; every first Monday of the month I hit one chore that few homeowners like to do. It's like a monthly collective whine. See you next time.

Email ThisBlogThis!Share to TwitterShare to FacebookShare to Pinterest
Labels: bathroom, Do I Have To?