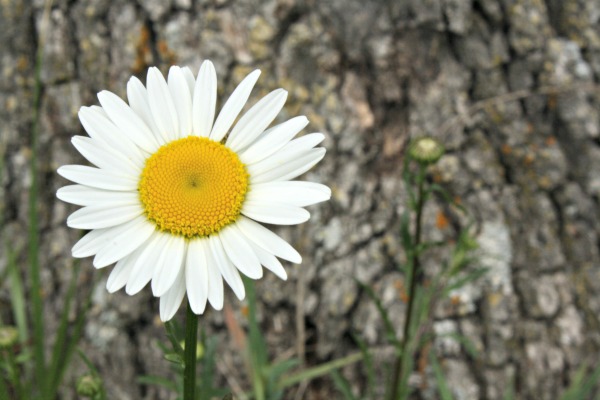 I'm going to take liberties with the timeline, and toss the blog back to April. You can do that in blogger world. I wish you could do that in real life, too. Just a little, now and then.

In April, Tom and I went to Missouri to see my Dad. My sister Dyan came up from Atlanta, and we made a long weekend of it in the Ozarks.

This is the view from my Dad's place, which we call "The Hill." I wish this was a painting. 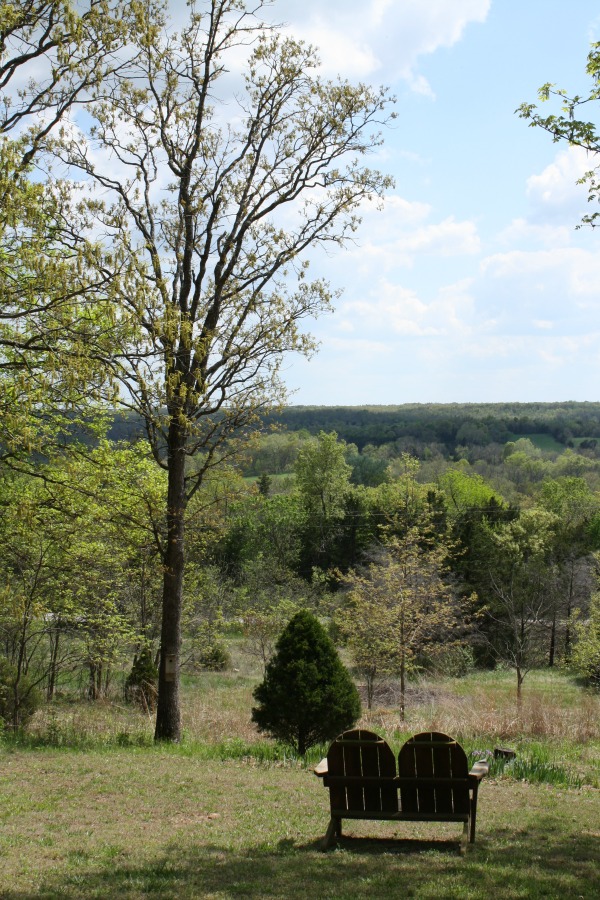 The Ozark hills in April are made up of tree bark and green mists and blue sky, mostly. But it also has dozens of tiny wonders you'll miss if you fail to pay attention. You need to get up close and personal with an Ozark spring to really know it like you should.

New oak leaves are as rosy and beautiful as any spring flower. 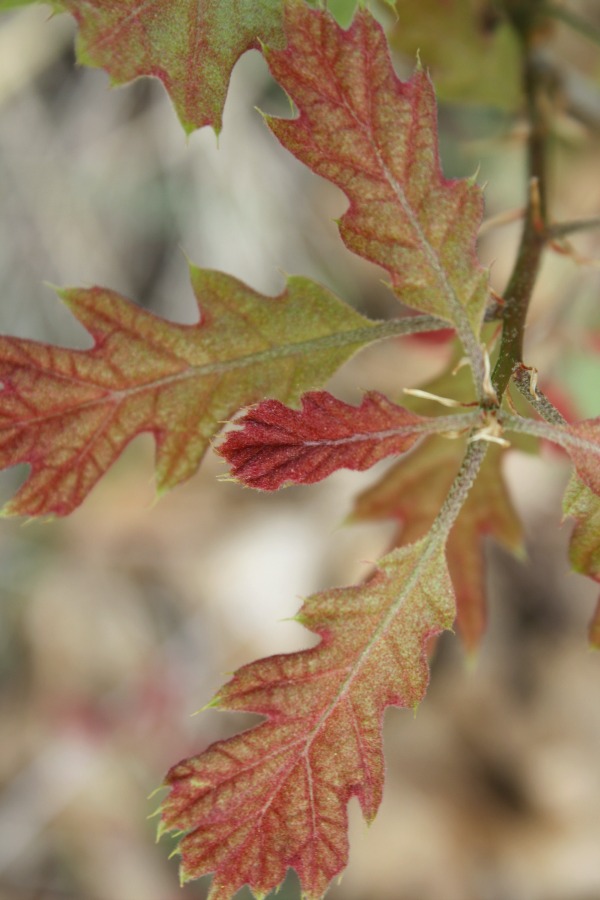 And mayflower is hidden under its own great green silk umbrella: 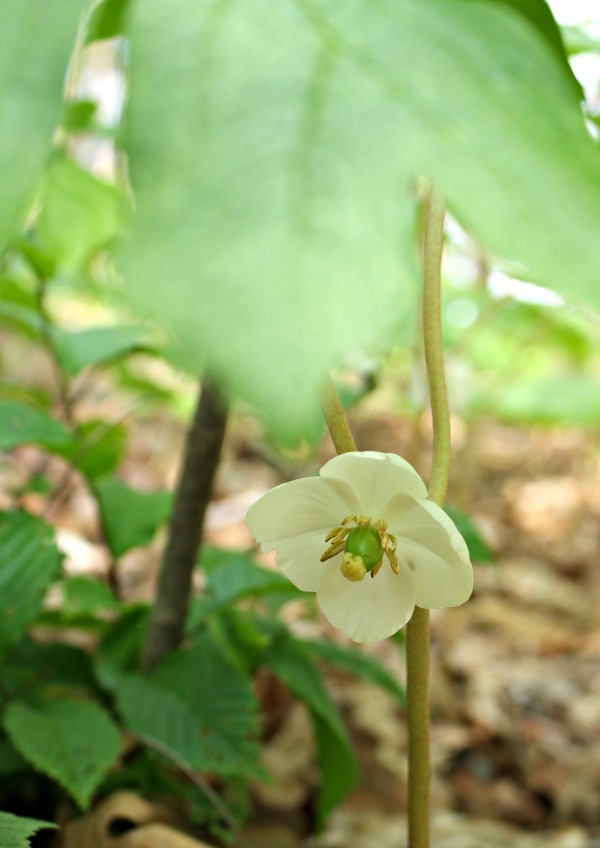 Blue-eyed grass. It should be the name of an Emmylou Harris album, shouldn't it? 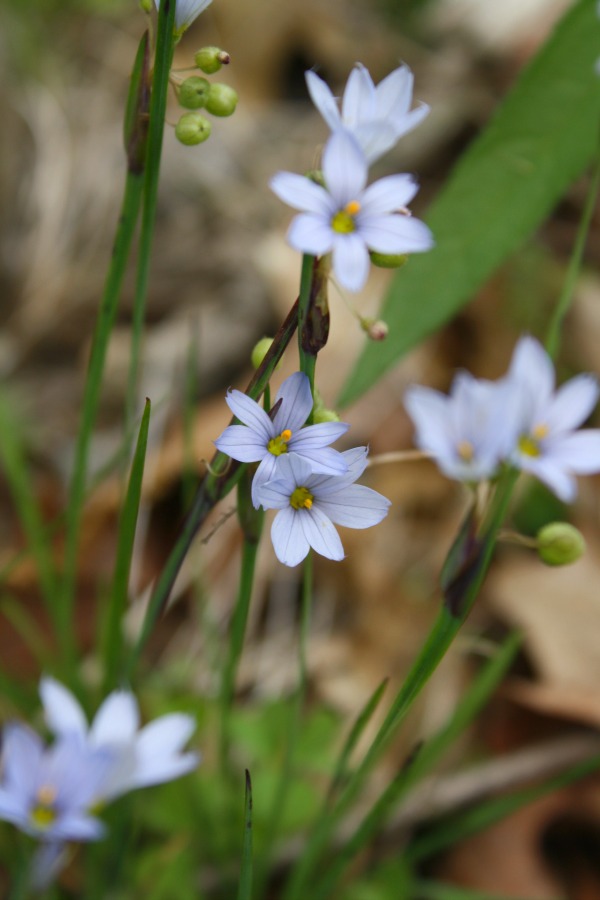 We visited Wilson's Creek National Battlefield. Ancestors fought in this battle (you can learn more here). We keep returning, partly because my Dad's a military history buff, partly because we ran a race as a family here (read about it here), and partly because it's just one of the most indescribably pretty pieces of land in southern Missouri--rolling hills and winding creek, oak savannah and tallgrass prairie. Below is the Ray farmstead. It is sobering to realize so many men sacrificed their lives in a place so beautiful, on a hot day in August 1861. 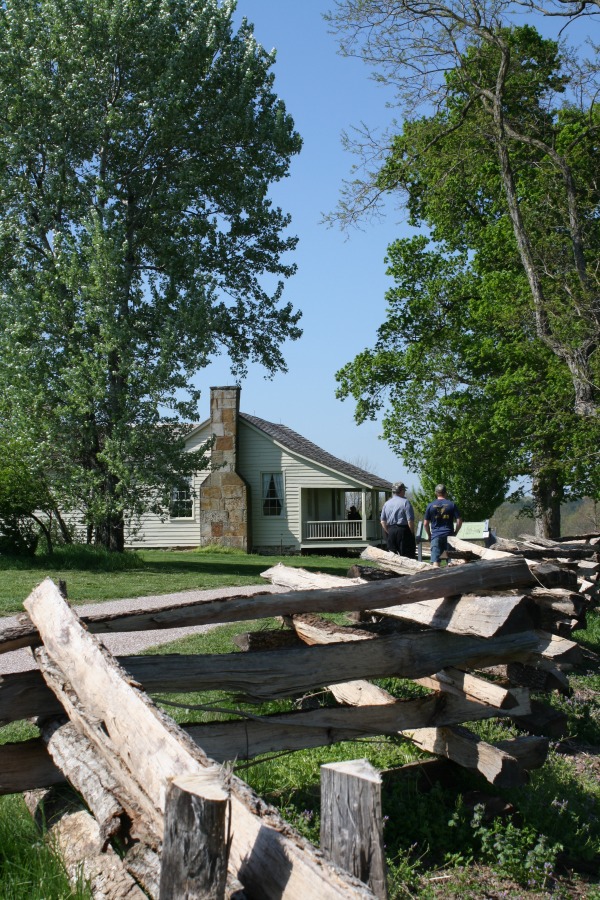 Dad and Tom are in the photo, two of the men I love the most in this world. They met for the first time that weekend. They got on well. (Whew.) Then again, I sensed they would. Some things fall into place like they were meant to happen all along.

I have a fascination for stone fireplaces. I'm not sure why, but I always come home with photos of them. 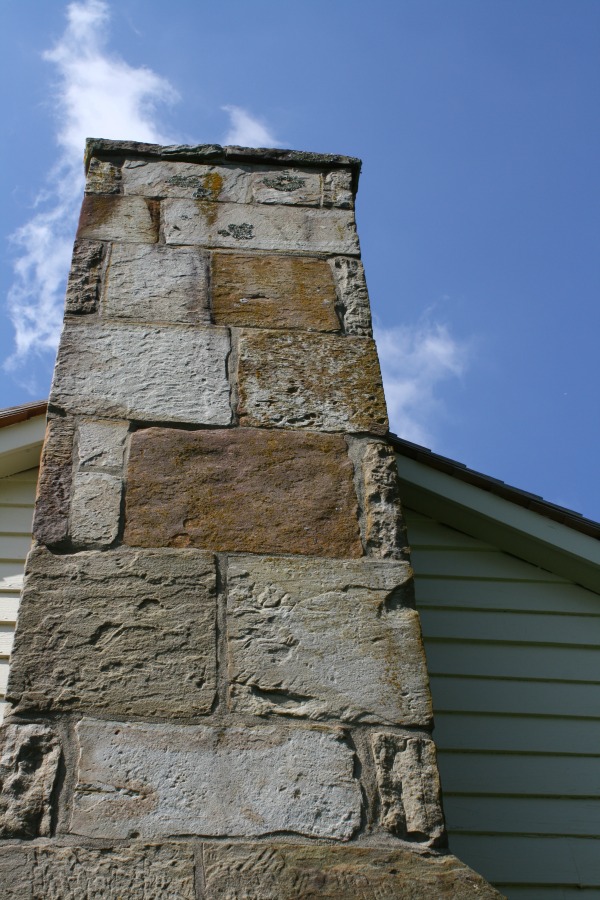 The furnishings in the Ray farmstead museum are so simple it feels serene. 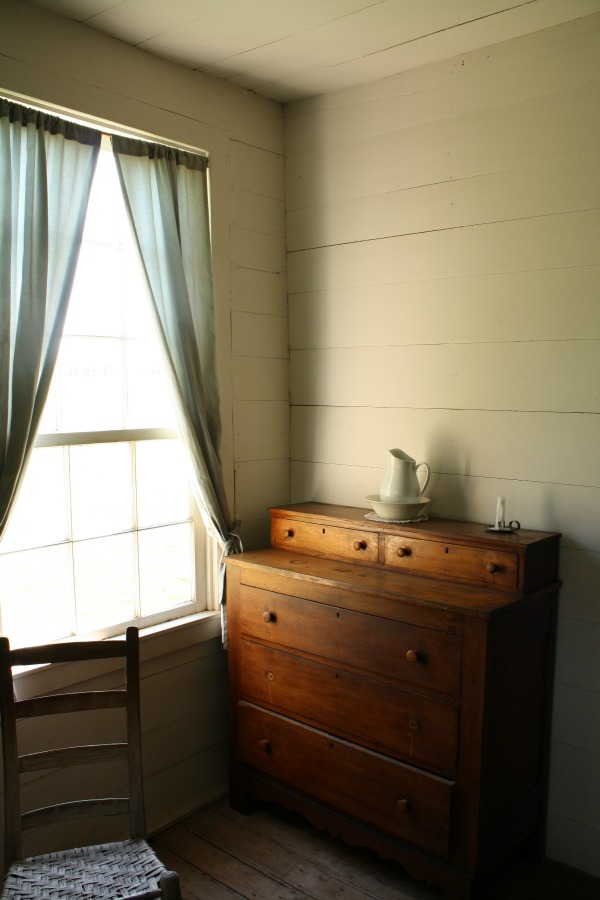 Local volunteers and museum docents are dedicated to bringing history to life here. This gentleman told us about life on the battlefield for a Union soldier. 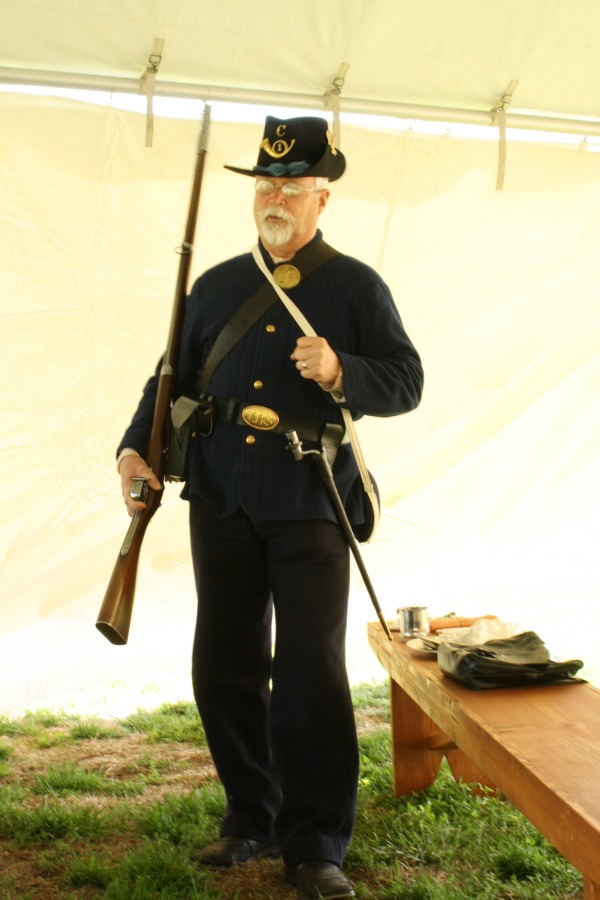 I was fascinated by the design, angles, light and shadow of this split rail fence. 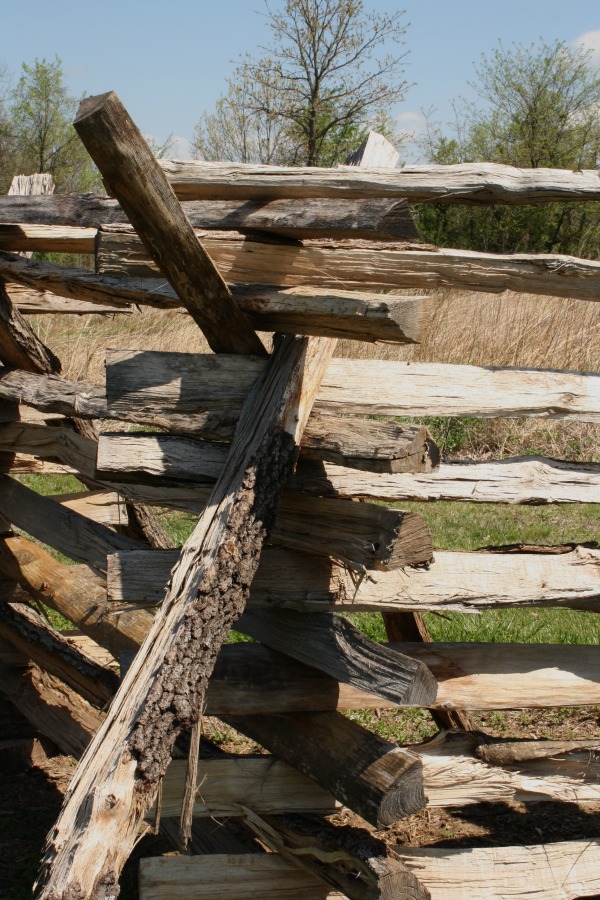 And the bark of this chestnut tree: 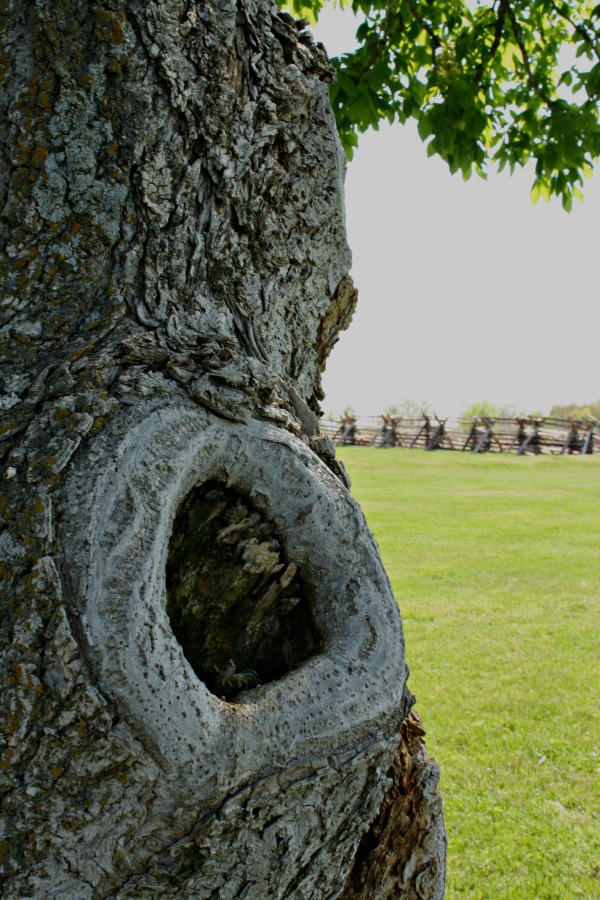 And sunlight filtered through sassafras leaves. 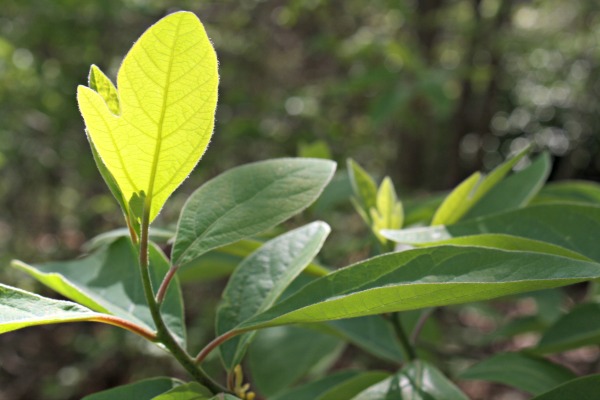 Sassafras light. Those are two words I've been playing with since I took that picture, bouncing around in my head. What do they mean? I don't know. Still, I like the sound of them, paired with the memory of that April weekend. It's a good alternative title for spring in the Ozarks.
Posted by Laura at 2:35 PM